Home | Research & Opinions | Career women: It takes a village to raise a child

Career women: It takes a village to raise a child 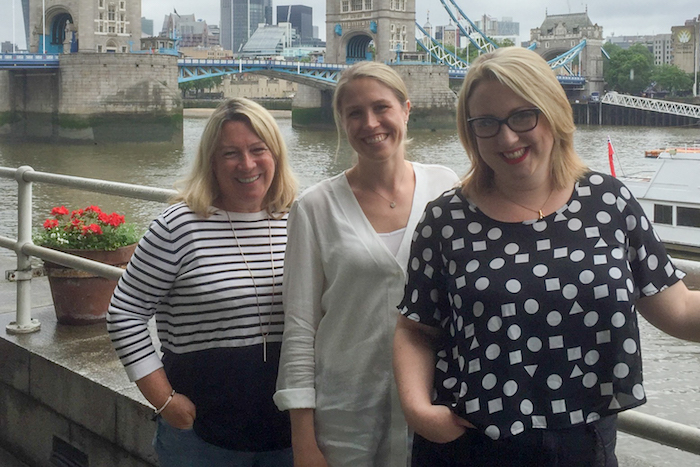 A very personal  story  by  Averil  Leimon They say ‘it takes a village to raise a child’ yet many modern women seem to assume almost total responsibility for the survival and well-being of their infants with a secondary role somewhere for the father. I meet women all the time who are worried about getting it right, being perfect mothers to the point where they consider giving up their hard earned careers. I thought I should take count and offer gratitude to all the people who contributed to making my adult daughters the amazing, hard-working, well-grounded and fun women they are today. Many women have very sensible child care stories. Mine was more like a particularly complex piece of crocheting. My first nanny was Kay. She was actually my cleaner – a cerise haired, navel bared, leather jacketed south Londoner. Unlikely, but I watched her amuse my baby while I took a call and thought, ‘she’ll do’. Kay stayed for years. I had a second baby. She knew she had to break away and change her destiny but had fallen for my daughters. Eventually she used the confidence she had built to pursue a new career. She trained as a care worker for troubled teenagers, as she herself, had once been. We danced at her wedding and still exchange cards now she lives in deepest Devon. After that I had two wonderful Swedish au pairs – Therese and Karin. They were young, bright, gorgeous, delighted to be in such a diverse city as London. They cared for and fed my children, organised all the after school activities, wrestled them into their leotards for ballet and acted like very responsible big sisters to them. We always felt they were part of our family, step daughters of a sort. They grew up, found themselves and blossomed into great young women. I had lunch with Karin at the weekend. She had been an au pair for me 18 years ago. Karin now has two degrees, is married with a small son and a career in the automotive industry. Living in Sweden of course makes that a bit easier! Then came two Hungarians who brought a different type of Europe into our house. I think we still have some of the paprika left. Our grasp of Magyar never got any better but we met their families on visits to Budapest and widened our horizons. I miss au pairs and really wish it was acceptable to hire them just to look after me. Scotland played its part. My parents sadly died too young but I am indebted to a step Mum who would jump on a plane when childcare cover went awry and a sister who would take them for a couple of weeks of country and beach life every long summer holiday. My brother who would cook them ‘lapin’ and feed them oysters, my baby sister who swore to defend them with her life. There was the ex chef turned babysitter who took them to Billingsgate to buy and cook crabs and mussels, taught them how to wield sharp knives and make cafetieres of coffee for me when I finished work, leaving the kitchen like a bomb site. And then there’s the gay self-appointed godfather who took it upon himself to give prospective boyfriends a very hard time. The girls protested but always warned the boys they had to pass this unconventional rite of passage. My daughters are the most important thing in my life. How they were raised was critical to me as a psychologist. For that reason, I needed every single one of these people to do their part so that I could be the best mother and the best hard working role model for them. So thank you Scotland, England, Sweden and Hungary. I couldn’t have done it without you. Women – don’t try to be perfect or do it all yourself! Start building your support network now, so you broaden your child’s perspective and build their confidence in the world. Accept all help. Be fierce in making sure that it is right for you and your children, but do not attempt to go it alone like some kind of demented superwoman.   P.S. And my husband. Does he deserve more than a foot note? This was second time around for him. He knew he wanted to be more hands on than before when he was a junior doctor working long, long hours. Left with him, they were never dressed in matching clothes, or sometimes even dressed at all. They would be crawling around while he watched rugby. They were fed at strange hours or more likely taken to a restaurant at a very unlikely hour. He was the risk taker, the one who encouraged unconventional behaviour. He is incapable of embarrassment and much more likely to get into trouble than they ever were. I know where they are planning to take him for Father’s Day – and he will love being the centre of their attention.