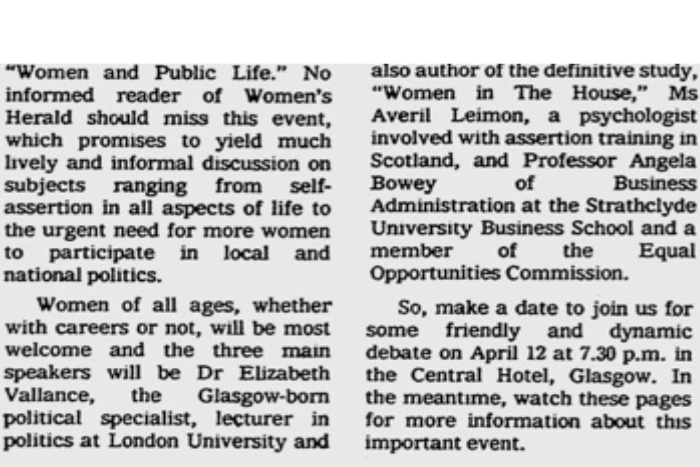 I have been banging on about women for a long time. . . .a very long time. Amazing what turns up if you Google yourself. That press cutting came from 1983 and was my public speaking debut. I remember it well, even that I was wearing a fabulous cream trouser suit with strong shoulders. Sadly, no pictures… One of the other speakers was arguing for 50:50 representation in Parliament. We thought that was fair in the 80s. (We have in fact reached a record high last year – at only 29%.) We are still not doing so well in business either. I’ll own up. My work is predominantly with executive men – after all, check the numbers. Business is business. I love that work, but I have been quietly mounting a stealth campaign thinking I was changing the world, ‘One woman at a time’. But you know what? Just not fast enough. And not soon enough either. All our research with senior women found that they felt their careers had been decelerated at various points and they all said, ‘If only I had known what I now know’. So while we need to continue our work getting women into the boardroom and more senior positions, we actually need to catch young women and get their feet on the path first, and fast. I was speaking at an M&C Saatchi event last year and the research carried out for that event showed young women lagging behind early on in their careers. Despite better academic results, they didn’t have the same level of confidence to put themselves forward, to ask for development, opportunity or a raise. The gap starts widening early. So whatever programmes there are for senior women, we need to make sure that young women, who are still likely to have more complex choices and lives, are equipped for the fray and have life and career plans and all the beliefs and skills that they need to achieve their potential. Recently I got a call from a young woman. She told me how much she admired what we did for senior women but it would be too late for her. Her company did not provide any development at her level. She was prepared to invest in her own coaching, despite saving for a mortgage, but her budget was a fraction of what most coaches would charge. So, I devised a Fight Club for women. (sadly no one would let me call it that). The important components are getting women on the path to success early, building their brand, speaking up, grasping opportunity and going places they want to go. Equally important is connecting with older role models who can confess to a lack of perfection and tell their war stories about life, work and how their children have turned out ok. Don’t get me wrong, men at all stages need development too and benefit hugely when they get it, but the statistics tell a powerful story when the majority, i.e. 51% of the adult population (yes, that’s us women) are still lagging so woefully behind. Let’s not waste this amazing resource. It just does not make good commercial sense.