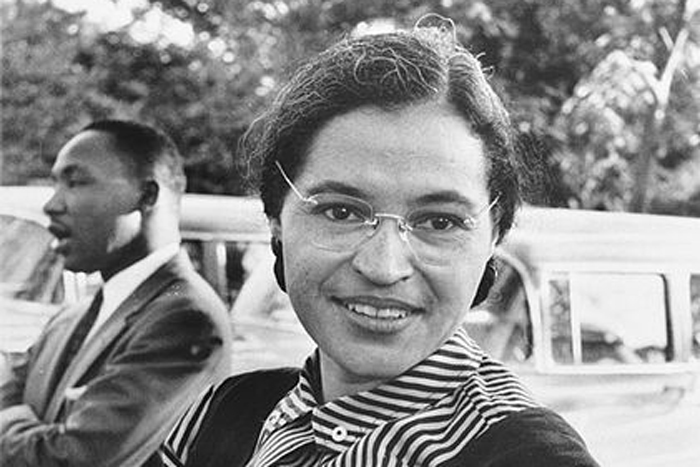 “The cup of endurance runs over, and the human personality cries out, ‘I can take it no longer’ “ (Dr Martin Luther King, Jr., 1958). December 1, 1955 in Montgomery, Alabama. Rosa Parks refuses to give up her seat on the bus and a series of events is put into action that will change the shape of the world. Parks has since been referred to as “the first lady of civil rights” and “the mother of the freedom movement”. After her parent’s separation Rosa grew up on a farm with her maternal grandparents and younger brother, where she began her lifelong membership of the African Methodist Episcopal Church. Parks was forced to drop out of her secondary education at a laboratory school set up by the Alabama State Teachers College for Negroes, when her grandmother and mother became ill. Although she often spoke of early memories of the kindness of white strangers, Rosa could not ignore the inherent racism around her. As there was no school bus transportation for black schoolchildren, she recalled that “the bus was among the first ways I realized there was a black world and a white world”. In 1932, Rosa married Raymond Parks, who urged her to finish her high school studies, which she did in 1933, at a time at which less than 7% of African Americans had a high-school diploma. Despite the Jim Crow laws that impeded her, she succeeded in registering to vote on her third try. Sometime after 1944 Rosa held a brief job at Maxwell Air Force Base, a federal area where racial segregation was not imposed. Later she would say that riding on an integrated trolley at Maxwell opened her eyes. After a day at work, Parks boarded the Cleveland Avenue bus. She paid her fare and sat in the “coloured” section. When the bus driver, James F Blake, demanded that her row move to the back to make space for white passengers, all but one did so without question. Rosa, instead, moved up so that the white passengers could sit next to her. Years later she recalled, “I felt determination cover my body like a quilt”. Despite her membership of the NAACP, Parks bravely took this action as a private citizen. When she spoke about taking a stand, she said “it was just time… the more we gave in, the more we complied with that kind of treatment, the more oppressive it became”. Parks was charged with disorderly conduct and, in a trial that lasted only 30 minutes, she was convicted and fined. Sunday the 4th of December saw the announcement of plans for the Montgomery Bus Boycott. It was decided that a new organization was needed to lead the continuing boycott effort, and so the Montgomery Improvement Association was formed, the president of which was a mostly unknown young minister, Dr. Martin Luther King, Jr., who later described Rosa as “one of the finest citizens of Montgomery – not one of the finest Negro citizens, but one of the finest citizens”. The black community preserved their boycott, some walking as far as 20 miles to get to work every day, for 381 days. Some segregationists retaliated with terrorism, churches were burned, King’s home was bombed, however the boycott persevered and marked one of the largest and most successful mass movements against racial segregation, sparking many others and catapulting King to the forefront of the movement. Rosa Parks suffered for her position as an icon for the Civil Rights Movement, as both her and her husband lost their jobs and were unable to get rehired in Montgomery. In 1965, however, US Representative John Conyers hired her as a secretary and receptionist in Detroit. As he said, “you treated her with deference because she was so quiet, so serene … there was only one Rosa Parks”. The ‘70s were fraught with personal distress for Rosa, as her husband, brother and mother were all diagnosed with cancer. Parks often visited all three hospitals in the same day. This, and financial strain, meant that it was a time of withdrawal from the civil rights scene. In 1980 Parks, widowed and without immediate family, rededicated herself to the cause, co-founding the Rosa L Parks Scholarship Foundation and the Rosa and Raymond Parks Institute for Self Development. Despite declining health, she continued to work as passionately and with as much commitment as ever for racial integration. During her life, though only many years after her original protest, Parks was awarded many impressive honours, such as the Spingarn Medal, the Presidential Medal of Freedom and an induction into the Michigan Women’s Hall of Fame. Nelson Mandela, whom she was invited to meet upon his release, hugged her and said “you sustained me while I was in prison”. Her death in 2005 was marked honourably in many ways. The front seats on city buses in Montgomery and Detroit were reserved with black ribbons out of respect, her casket was taken to lie in honour in the US Capital Rotunda, an honour that she was the first woman and the second African American ever to receive.  That day all flags in US public areas both within the country and abroad were flown at half-mast. In 1999, Time magazine named Parks as one of the 20 most influential iconic figures of the twentieth century. She devoted her life to a cause, through much personal difficulty and persecution. She was quiet and serene in the face of oppression and through this she not only gained her place in the history books, but also personally contributed to a movement that changed the world. Great and impressive figures, King and Mandela among them, have fallen with praise at her feet. She should inspire us in innumerable ways, but largely she should remind us that an act can be small, and move mountains, and that what we so often need in life, is a little bit of defiance. By Jessica Bird