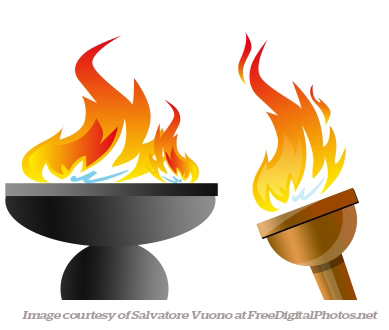 Enthusiastic leadership trumps pessimism. This week the Olympic flame was lit by the rays of the sun and it started its journey around Greece; this in effect marks the beginning of the Games season. A reassuring symbol of stability and international influence in a country immersed in economic gloom. Gloom is a word that is often associated with big projects in the UK: from the Channel Tunnel (rabies from the Continent!) to London 2012 (chaos in public transport!), we seem to delight in predicting negative outcomes. It is easy to blame the press’s need for a good headline, but journalists often read the national mood and then amplify it. Where does this need for pessimism come from? Alain de Botton traces it back to religion: endure a tough earthly life and don’t expect happiness until the next world. We prefer to use a psychological defensive mechanism: expect little and you cannot be disappointed. The outcome of big projects is often extremely successful in spite of early difficulties: the Eurostar now carries 10 million passengers per year – the equivalent of over 200 flights each day! But sometimes the negative attitude can tip a project towards failure. There was not much wrong with the Millennium Dome: those who actually attended rather enjoyed it; the problem was that ‘nobody will come’ became a self-fulfilling prophecy. Contrast this with the recent success of the O2. Couldn’t things have gone this way right from the start? This is where leaders can make a huge difference: optimism and enthusiasm are fantastic coping strategies for difficult times. Research on flourishing and languishing teams is striking: the former focus on positive speech by a factor of 3 to 1 compared to the latter. They have an outcome focus in their problem-solving as opposed to a blaming one. In effect optimists try harder and it shows in their results: 30% more sales for example in controlled studies. Leaders have an important role to play in tipping the thinking of their teams towards a successful outcome. Not every speech needs to be as rousing as that of Henry V before battle, a simple change of perspective, day in day out, will influence results. So here we go: London is where the world meets and 2012 provides the perfect platform; thousands of businesses are already taking advantage of the opportunity to showcase themselves; the City is making itself pretty and investing in long-needed projects such as Crossrail; there may be transport difficulties, but there are plenty of resources to help us prepare and our ‘Dunkirk spirit’ will help us cope. This will be the longest summer party in living memory: come and join us!