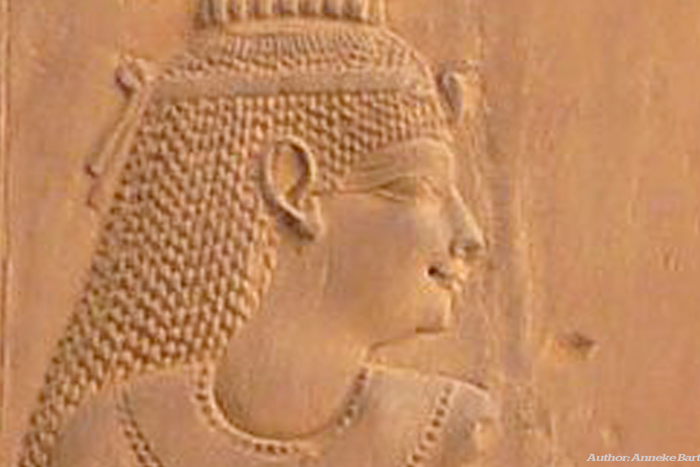 Cleopatra, immortalized by Shakespeare, a lover of great men, an iconic ruler in her own right. She was the last person to rule Egypt as a Pharaoh, originally in unison with her father and then her brothers, until she eventually cemented her personal rule through her liaison with Gaius Julius Caesar. Most members of the Ptolemaic Dynasty refused to learn Egyptian, Cleopatra, however, learnt the language and adopted Egyptian customs (despite being a descendant of Greeks) to fuel her reinvention as the reincarnation of an Egyptian Goddess, one of the many astute political moves that earned her a place in history as a symbol of power. Cleopatra “kissed away kingdoms” with the most powerful men of her era, using her innate sexuality to influence politics in many ways, and eventually to draw Mark Antony, with all his warmongering skill, to her side in times of conflict. Her affair with Julius Caesar perfectly demonstrates a woman using the norms of her time, in which she would have no power without such a connection, to her advantage. Indeed, the use of sexuality nowadays may be seen in bad taste, but in her time it was all women had, and she used it astoundingly well to hold sway over the men in her life, and to become an icon. The prevailing image of her suicide is not one of cowardice, but of nobility. As she clutched two asps to her, one to her breast and the other to her arm, she enacted a scene that would become synonymous with dignity. Though we cannot claim to know the exact motivations behind the act, history tells us that she was following the tradition expected of great rulers after a defeat such as hers at the Battle of Actium. Cleopatra did not shy away from this most final duty and, in Shakespeare’s Antony and Cleopatra we are told that she “by her death our Caesar tells ‘I am conqueror of myself’ “. Not willing to be degraded by death at her enemies’ hands, Cleopatra cemented her place in history with her suicide. Her life being so shrouded in fantasy, it is hard to extricate what is true. Shakespeare’s portrayal of the great woman is possibly the fuel for most of our images of her. In Antony and Cleopatra, she is often portrayed as the male form in their relationship, as she is strong, decided and holds the power. Her femininity is far from neglected. She is the epitome of womanhood, sensuality and empowerment. Often far from a deity, she has flaws, makes mistakes and is not always the shining image of perfection she could be. All-in-all creating the essence of female humanity. To have inspired the Bard to such great heights is surely the feat of an extraordinary woman, and despite the fact that much of what we know of her cannot necessarily be verified historically, we should certainly still be inspired by this force of nature, this emblem of womanhood who held the ultimate power in a man’s world. By Jessica Bird