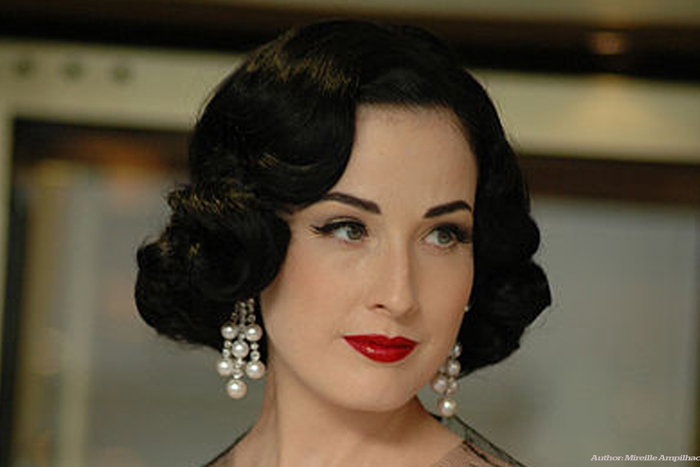 The innate struggle of so many women is to be recognized for their assets and not their ‘Assets’. Yet here I am, someone who has always railed against the male inability to see past breasts, admitting that I am truly, madly in love with Dita Von Teese. Yes, she uses her body, and the male obsession with it, for monetary gain, and yes she reciprocates the idea of female objectification. But my gosh, doesn’t she do it in style? I’ve realized that, as women, we can be both appalled by objectification, and appreciative of a nice Basque. This does not make me a hypocrite, it just means that I adore my sexuality on my own terms, and Dita Von Teese is the ultimate role model for this. Born Heather Renee Sweet, Dita’s obsession with the 1940s was nurtured by her mother, who was a fan of Golden-era Hollywood films. Dita learnt her poise and grace through a classical ballet training. Von Teese remembers being enamored with lacy garments and stockings, and incredibly disappointed when her first bra was that floppy, cotton type we have all, at some point, looked at with a sigh. Working her way up to be a buyer in a lingerie store fuelled Dita’s fondness for elaborate corsets and basques. She went on to study historic costuming, and currently designs many of her own costumes. From humble beginnings emerge great things; Von Teese’s career began against the seedy backdrop of a local strip club, in which her erotic, vintage costume choice drew the interest of a clientele bored by the mediocre sex-pandering of the other women who were, quite simply, strippers. During this time Dita began glamour modeling, eventually branching out into fetish modeling, creating an icon of herself as a retro pin-up. Dita Von Teese is best known for being “the Queen of Burlesque”, an art form (yes, art form) that she started performing in 1992, and the revival of which she helped to instate, under the term “New Burlesque”. Putting “the tease back into striptease”, Von Teese’s dance shows are long and elaborate, drawing on the tantalizing essence that has gone out of the modern world of sex. These shows are theatrical, using elaborate props, inspired by the ‘30s and ‘40s, including the world’s largest feather fans, and the world-famous martini glass. Von Teese has made herself memorable, once wearing nothing but $5 million worth of diamonds for a benefit for the New York Academy of Art. A sex symbol, a fantasy, Dita Von Teese has reminded men and women alike of the joys of delayed gratification, the tantalizing mysticism that is present in a woman who does not simply hand it all to men on a plate. More, even, than a sex symbol alone, Von Teese is a business-woman. Just because her product is herself, her sexuality, does not mean that we should dismiss her as a floosie and a harlot. Dita’s official website is often referred to as one of the first model sites on the internet, she pioneered her business, and her business was herself. She has also not simply rested on the laurels of her looks, but is highly educated in the area of her passion, having written her first book, Burlesque and the Art of the Teese, in 2006, and since contributing to many other works around the subject. Far from suggesting that we all strut around the streets in burlesque get-up, waiting at platform 5 for the 13:14 in a large martini glass, yours truly understands that there is a time and a place for these things, Dita found her niche, worked damn hard, and has made herself a success. She should inspire women in all walks of life, professional or personal, on the one hand to tough it out for what you love, and on the other, to love your own body. No matter what way you look at life, sexuality (or, perhaps, sensuality) is the big question, it is often the elephant in the room, can launch a thousand ships and topple empires. What Von Teese teaches us, is that women don’t have to be enslaved by their sexuality, we can have it on our own terms. Female sexuality is an awe inspiring thing, and if, rather than pandering to what lies behind the dreaded zipper, we instead used our bodies, our urges and our needs to feel empowered, I maintain that our entire gender would undergo a sexual revolution. Dita should inspire us to stop obsessing over our wobbly bits, and more importantly to stop being secretly proud of the bits we like, and instead to stand before the mirror and say, goddam it I’m hot, with all my paunch and cellulite, because you know what, I have control over my own sexuality. A sex symbol, a business woman, dubbed “a Burlesque Superheroine” by Vanity Fair, Dita Von Teese, whilst perhaps not the role model you might introduce to your children too early on, is someone we should be inspired by once we are old enough. Rather than fighting our sexuality as a tool of male oppression, let’s work with it, let’s change the way men and the world see the female body. Dita Von Teese is undeniably a powerful woman, and her example should remind us that we all have a right to respect without having to become sexless. Every woman in the world holds a great power inside them (cue inspirational music), Von Teese has tapped into hers in her own way. We don’t have to do it her way, but we should be inspired by the fact that she has done it. Now, if you’ll excuse me, I’m just going to clamber into this giant cup of tea… By Jessica Bird