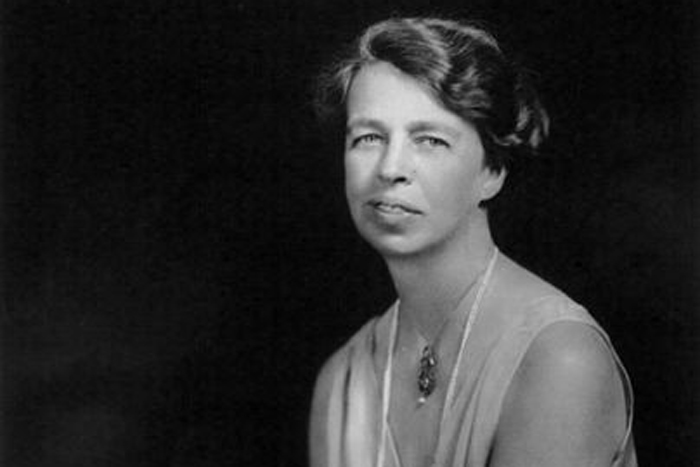 More than a First Lady, Eleanor Roosevelt took an active role in politics and became an advocate for human rights. Her legacy transcends and precedes what she did as the wife of a president, and she is now one of the most highly respected figures of the 20th century. Despite being born into privilege, her early life was fraught. Eleanor’s mother died from Diphtheria when she was only eight and her father, an alcoholic confined to a sanitarium, followed soon after. She has been described, during her younger years, as insecure, starved for affection and considering herself ugly. Her crippling personal insecurities, despite lasting long into her adult life, did not sway her from the understanding that physical beauty is not the be-all and end-all of success, and at 14 she wrote that “no matter how plain a woman may be if truth and loyalty are stamped upon her face all will be attracted to her.” Eleanor began to realize the issues of the world around her from an early age, becoming one of the New York Junior League’s earliest members. Through this organization she volunteered as a social worker in the slums of New York’s East Side. Soon after she began this work, she began to be courted by Franklin D Roosevelt, her father’s fifth cousin. Despite having met him in the auspicious circles of her uncle, President Theodore Roosevelt, Eleanor boldly took Franklin with her on her rounds of these squalid tenements, a tour that is said to have had a profound effect on the previously sheltered young man. After they were married, Franklin was elected to the state senate. Eleanor herself had many influential roles. She founded the UN Association of the United States in 1943 and was a delegate to the UN General Assembly, appointed by President Truman.  During this time she also chaired the committee responsible for the Universal Declaration of Human Rights. Throughout the ‘50s Roosevelt averaged 150 lectures a year, many devoted to her activism on behalf of the UN. Active throughout the political spheres, Roosevelt was also influential in the realm of feminism, chairing the Presidential Commission on the Status of Women, and thereby helping to launch second-wave feminism. In her private life, Eleanor Roosevelt continued to face trials, one of her six children did not survive infancy, her marriage near disintegrated over Franklin’s affair with her social secretary and in 1921 Franklin suffered from an illness that resulted in the permanent paralysis of his legs. After finding out about his affair Eleanor remained married to Franklin, insisting he end the relationship or face a divorce, and she emerged from the experience with the realisation that it was her prerogative to achieve fulfillment on her own terms. At a later point in the marriage there would emerge an understanding that “Eleanor and Franklin were strong-willed people who cared greatly for each other’s happiness but realized their own inability to provide for it” (Smith). From this understanding emerged many hints of Eleanor’s romantic involvements, some of which referred to instances of lesbianism. After his paralysis, Eleanor forced herself to overcome her shyness to make public appearances on Franklin’s behalf, becoming a barometer of popular sentiment. She simultaneously became prominent herself in the world of Democratic women. Franklin, appreciative of the sacrifices his wife had made for him, paid great tribute to her and encouraged the world to see them as a team. On the 4th of March, 1933, Eleanor Roosevelt became the First Lady of the United States. She refused to become mired in the strict traditions and expectations of this role, and continued an active political career in her own right, in which she remained publicly in support of the African-American civil rights movement. Over the span of her husband’s presidency, when only 25% of women worked outside the home, Eleanor held 348 press conferences into which men were not welcome. This brought women out of the domestic sphere, allowed them to think in a broader spectrum and defied the masculinity of the media. Roosevelt’s trip to the South Pacific in 1943, during which she visited thousands of wounded servicemen, cemented her image as a strong woman revolutionizing the role of First Lady. During her life Roosevelt received the homage of 48 honorary degrees. She was also awarded one of the United Nations Human Rights Prizes and was the first First Lady to receive honorary membership into Alpha Kappa Alpha, the world’s first sorority for African-American women. At her death in 1962 at the age of 78, having developed bone marrow tuberculosis, President Kennedy ordered the lowering of flags to half-staff. On the one hand, Eleanor Roosevelt had many opportunities to recline into a luxurious and privileged lifestyle; on the other there were also many occasions when she could easily have disintegrated into the uselessness of despair. Instead she battled against her own insecurities and the trials that struck her personal life, and used her high social standing to force herself out into the world. Eleanor is an example the sheer strength of ‘Woman’. She controlled and advanced not only her own political career, but her husband’s as well, at the same time as spearheading many social battles across the board. The world in which we live today has many of the marks of her life imprinted on it. One of her inspiring achievements is the transformation of the role of First Lady into an influential political entity. She was a force of nature after whose death the world mourned and who was referred to by President Truman as “The First Lady of the World”. By Jessica Bird