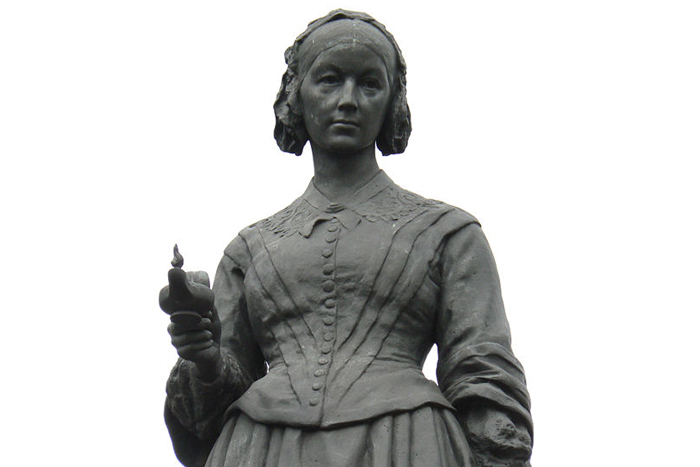 “I attribute my success to this – I never gave or took any excuse.” Florence Nightingale was the first woman nurse and the founder of modern nursing. Today, ninety percent of people working in nursing are female (NMC, 2008), but when Florence was born in 1820, it was considered improper for a woman to be a nurse. Florence played an important role during the Crimean War, as she was the first to organise field hospitals. Known as “The Lady with the Lamp”, because of her rounds at night to check her patients, in 1883 Florence got special recognition from Queen Victoria for her great work. From 1975 to 1994, Florence’s image appeared on the £10 banknote, only the second female character printed on a banknote after Queen Elizabeth II. Florence was born on the 12th of May, 1820 in Italy, of British parents that at that time were travelling around Europe for their honeymoon. She was named after the city where she was born, Florence, in Tuscany. At the age of one, she came back to England with her family and lived in Derbyshire. With a strong Christian belief, at the age of 17 Florence answered the call of God to devote her life to the service of the others. She started to visit towns were she used to live with her family to assist sick people. Even if at that time she didn’t have a huge medical knowledge and experience, Florence immediately realised how bad sanitary conditions and medical cures were. In 1845 she announced to her parents her desire to be a professional nurse and help others. Unfortunately, Florence’s aspirations met with opposition from her parents, especially her mother who wanted her to be a wife and to have children. Afraid that marriage would have obstructed her career, Florence never got married. Between 1849 and 1850, during a trip around Europe, Florence met Father Theodore Fliender and visited his hospital in Kaiserswerth, Germany. The year after, thanks also to the economic support of her father – who believed that women should have the same education as men – she returned to Germany to attend a course at the Institute for Protestant Deaconess where she finally became a professional nurse. In 1853, after her return to England, she became the superintendent of the Institute of the Care of Sick Gentlewomen. In 1854 the Crimean War started and many soldiers were wounded and forced to live in terrible conditions without appropriate medical treatment. The correspondent of the Times denounced the poor hospital equipment, the bad sanitary conditions and how precarious the situation was. The Minister of War, Sidney Herbert, who personally knew Florence, asked her to organise a group of female nurses and go to Turkey to work in the military hospitals. It was the first time females were asked to help in military hospitals and Florence successfully organised the mission.  In Turkey, she improved the condition of the hospitals; wounded soldiers started to get better and the number of deaths were considerably reduced. She understood the key factors to keeping the environment healthy – fresh air, pure water, a good sewer system, hygiene and light. Thanks to her work, she earned the respect of the soldiers and popularity in England. While she was still in Turkey, in fact, a lot of donations were given to the Nightingale Fund for the education of nurses. Once back to England, in 1860, Florence created the Nightingale Training School, now part of King’s College London. In the same year she wrote the Notes on Nursing, still a popular text among people studying nursing. Florence also wrote important reports for the English Parliament about the medical conditions during the war, using diagrams and graphics to illustrate her points. Thanks to her excellent mathematical and statistical skills, in 1859 she was elected as the first female member of the Royal Statistical Society. Florence Nightingale is remembered not only for her nursing and numerical skills, but also for being a feminist. Another written contribution is the Suggestions for Thought to Search after Religious Truth, a three-volume book that only recently has been entirely published. The best known essay is Cassandra, a character who fights against women’s passivity about their rights and emancipations, such as Florence’s mother and sister did. “A woman cannot live in the light of intellect. Society forbids it. Those conventional frivolities, which are called her ‘duties’, forbid it. Her ‘domestic duties’, high-sounding words, which, for the most part, are but bad habits (which she has not the courage to enfranchise herself from, the strength to break through), forbid it.” Florence saw all around her that women were not fighting for their rights. “I have lived and slept in the same bed with English countesses and Prussian farm women… no woman has excited passions among women more than I have.” Florence Nightingale died in London on 13th August 1910, at the age of 90. Written by Filomena Raia.