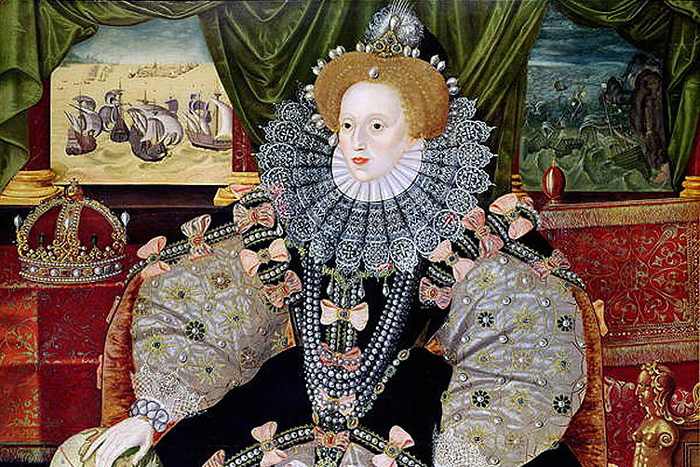 “I know I have the body but of a weak and feeble woman; but I have the heart and stomach of a king, and of a king of England too.” Very few people, and even fewer women, need to be told to be inspired by Elizabeth I. Even those who have not had the endless history lessons will have heard her claim to have stolen some bloke’s internal organs echoing from a stage or cinema screen. It is important to constantly be on the alert for new, unexpected women to be inspired by, and give fresh kudos where it is due; yet every so often we should return to the obvious ones, even if just to think to ourselves, ‘yeah, women are badass…’ At the age of two, Elizabeth lost her mother, Anne Boleyn (perhaps also warranting her own spot in our hall of fame, though that is another story). The story goes that a princess must suffer a stepmother before she can get her happy ending. Elizabeth, instead, watched her father go through four more women, casually beheading the ones that bothered him, which makes your average princess look somewhat squeamish. Elizabeth’s youth would have been one of uncertainty, wavering between legitimacy and banishment in the constantly changing religious and political environment created by Henry’s whim. If anything this seems only to have made her stronger, and as a child she was clever, excelled in sports and learnt to refine her public image, developing what might be called the ‘princely’ skills that would prove so integral in the years to follow. Elizabeth I came into power during a period of turbulence both for the country and the monarchy. The confusion of who should succeed once Henry and Edward had died, and the subsequent unpopularity of Mary’s rather austere Catholic rule, left Elizabeth with some rather tricky dilemmas, as well as a legacy of economic, political and religious upheaval. Undaunted, she proceeded to unite the country, defeat the Armada and preside over a period of cultural and literary development that would go on to form an integral part of the culture of the country and the world. As for religion, her decision to ignore her sister’s wish to maintain strict Catholic rule did result in the supremacy of Protestantism, but Elizabeth had the sense to learn from the mistakes of her predecessors, and, rather than forcing her people to follow her into yet another selfish extreme, allowed them to practise their own religion in private. Though avoiding the unpopular extremism of the monarchs before her, this did lead to difficult decisions, as Catholic forces seemed to be plotting to usurp the throne. Elizabeth had their figurehead, Mary Queen of Scots, captured and later beheaded as a sign of strength against this perceived threat. When the Armada, with this to spur them on, set sail for England, a weaker monarch might have faltered; instead there followed a victory to go down in the annals of history, further enhancing the public’s adoration of their queen. In a difficult environment, Elizabeth combined the ruthless strength of a king with the cool head and understanding of her more perceptive side, to ensure that the country grew in strength and unity. Her rule is said to have laid the foundation for Britain’s later strength as a world power. Whilst all this was going on, as Elizabeth united the country and made herself the envy of every modern PR expert, where was her man? Her sister before her had allowed imprudent marriage to further weaken her rule, whereas Elizabeth stood alone. She was not the meek politician’s wife standing behind her man, and she did not have to marry to gain the respect of the masses. To look back at women in this period of history, particularly the royal ones, is to see them bred for heirs, to be married off quickly in the most politically pragmatic matches. Elizabeth I, in comparison, defied this role, did a better job at being king than those who had the required genetic equipment, and commanded the love of a nation, all whilst sporting the world’s most complicated hair-do. It is important to remind ourselves, then, that we do not have to look too far to find an inspiring woman. Elizabeth stood alone in an era of turmoil and did not hide behind a man. As such, there is a darker side to her history, in which she had the odd political enemy done away with. Allowing for this, as an aspect of the era she ruled in, the modern woman can still learn a lot from Queen Elizabeth I, who understood the importance of public image, did not hide behind excuses and was as quick witted and intelligent as any man, in an age where women were often painted baubles. Though we may speculate about the course of history had she left an heir, as an unmarried woman she was the perfect finale to the Tudor period, leaving a legacy not of upheaval and religious extremism, but of strength, unity and enlightenment. She should inspire us to remember that even when history is against us, women are equipped to succeed. Even in such a traditionally male role, Queen Elizabeth I combined the best of both genders to cement her place in history as one of our most successful and legendary rulers. As Judi Dench’s portrayal of her once reminded a worldwide audience: “I know something of being a woman in a man’s profession.” So the next time the “boys’ club”, starts to feel too much to handle, get out your ruff and your curling irons, and remind yourself that in each of us there is the ability to take on the world. By Jessica Bird