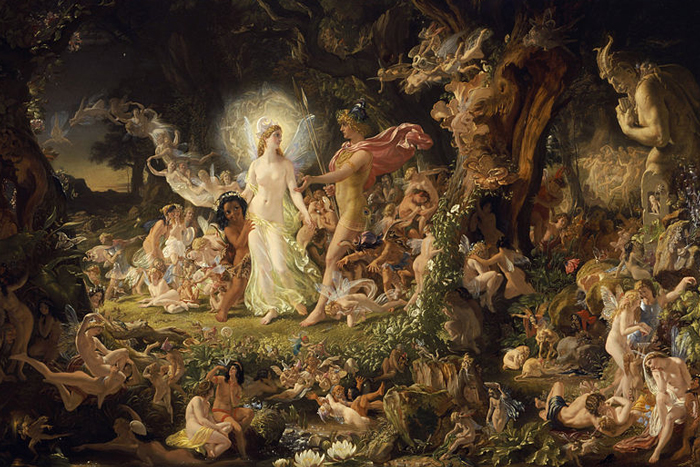 Have we not all wanted to ‘do a Blackadder’ and deliver Shakespeare a smart bop on the noggin when, for the hundredth time, we were made to read A Midsummer Night’s Dream in school? One of the more endlessly regurgitated of his plays, ‘the dream’ might have very little more to offer a modern audience, particularly an audience of women striving for success in any area outside that of being lured into marriage by fairy dust. It might surprise readers, then, when I say that Queen Titania is one of my favourite strong female figures. At the moment at which Titania and Oberon first appear, it is as opposites and equals. The words “lord” and “lady” are matched in weight. Shakespeare, in this opening insight into their relationship, does not establish a traditional male superiority, as he has in the courtly scenes that precede it. Titania has just as many minions in her train as her husband, and, entering opposite him, she displays a lack of dependence on the manacles of male dominance, that raises her high above the other women of the play. The balance of power between the two deities is fascinating, they spar with one another, and it is Titania who gains the upper hand. The iconic words “these are the forgeries of jealousy”, open a lyrical and commanding speech that dominates the scene, to which Oberon’s only answer is petulant and sulky. He hides behind a patriarchal ideal that only makes him seem as if a child, cowering behind an older sibling, whilst Titania stands proud, in possession of what he craves, not simply the changeling boy, but also dominance, sexual, political and decisive. She scoffs at his power over her, putting her foot down and placing her love for the boy and his mother above the assumption that she must bend to Oberon’s will. ‘Ah!’ I hear you cry, ‘but she is humiliated!’. And yes, by the end of the play, old Will has snuck everyone back into their comfy gender delineated roles, and with a quick shrug of apology from Puck, pretends nothing has happened, brushing under the rug that pesky image of a powerful woman. Oberon does, eventually, gain the upper hand, through Titania’s embarrassingly bestial affair, but he achieves this destruction of her power, not with his own display of dominance, but through trickery and magic. He has Puck running to the ends of the earth to find him a cure for his inability to perform, and sneaks around whilst Titania sleeps to discover a way of humiliating her, rather than having to face up to her empowerment. Compared to the other women of the play, floppy creatures obsessed with love and dominated by their fathers, their lovers and their king, Titania bristles with power. When she is out of sorts, so is the world. When she calls, the moon (the symbol of Elizabeth I) raises floods in answer. Shakespeare speaks of the “progeny of evils” that abounds once this woman chooses to step out of her prescribed role of deference and obedience. The chaos that results in the world reminds us of the sheer force of female power and defiance. Shakespeare demonstrates a world shaken by the refusal of one strong woman to stand down, and though she is eventually restrained, we should take heed from her image. Titania is a woman who holds sway over the elements, who leads warlords astray and who sees the importance of her equality among men. The men of Shakespeare’s age may not have been ready to allow a truly victorious, independent woman to take the stage, but modern women should remember Titania. Whether threatened by inequality, or sexuality, or even just a tough decision, look to Titania, who defied what was expected of her. She may have fallen, but it was not because she was not strong, and perhaps, in her stead, we may succeed. By Jessica Bird